I have not one, not two, not three, but FOUR cousins who have had babies in the last couple of months! I have been on a baby card spree. I made 3 of a kind... sort of. Slight variations... 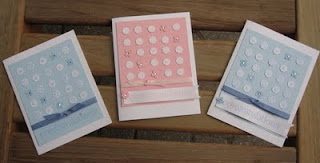 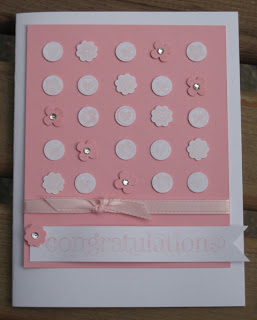 I used Pretty In Pink to create this card - but I didn't have a Classic ink pad, so I used Craft ink. I REALLY didn't want to color all those Itty Bitty Bits with a marker! The craft ink wasn't nearly as deep as the classic would have been but I'm just going to go with it. A TIP - I lined up the 4 bitty stamps on a clear block and stamped them all at once, several times, before punching them out. It was slick!! On the flag, I once again used my Curly Cute Congratulations stamp. No signs of being worn out yet! 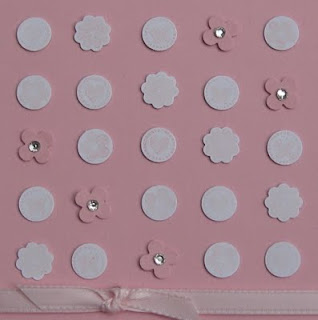 OMG this was fun but wow... it took forever to line everything up and keep the pattern going, keep the shapes from getting out of whack... it's not perfect but it's still pretty good! Every little girl needs a little bling. :) 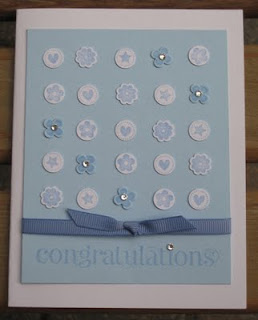 This was the first draft. I like it but it doesn't have quite the same punch as the second version. 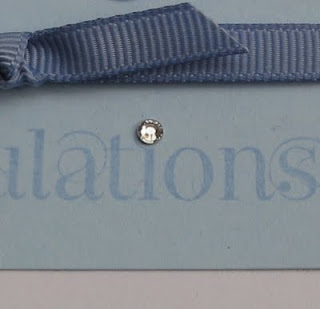 I used the same stamps for the blue cards as I had for the pink, but I swapped the butterfly for a star. This is the second version, which I like a little better. I'll still send out the whole lot, though, I do like them all! 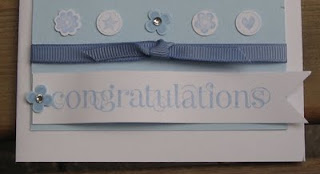 I gave the flag a little lift by shaping it with my bone folder - curving it on one side and then flipping it over and curving the other way to give it a wave effect. Hopefully it doesn't get smashed on its travels to New England! 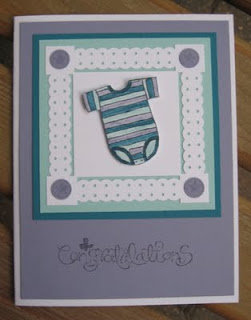 I threw this one together after our Stamp-A-Stack. It's a takeoff from a design we used there, but I used new In Colors: Pool Party, Island Indigo, and Wisteria Wonder. I had rolled out my friend's Baby Tees Jumbo Wheel onto a couple of strips of white to color and trim at my leisure. We used the Dotted Scallop Ribbon punch to create the border on this 3x3 square of white stock. Just center the punch on each side. SUPER EASY! I used the Swirls & Curls Verses hostess set from the Summer Mini and beefed up the color on the butterfly with a marker. I'll be sending this one in honor of a little boy - the colors are kind of androgynous. My daughter and I have plans to make another card like this but uber-girly and pink and fluffy for her friend - sadly, she had to miss the baby shower which was held on a Friday afternoon! I realize it's summer, but some people have jobs that keep them away during the day.. she's bummed but she'll live. I digress... 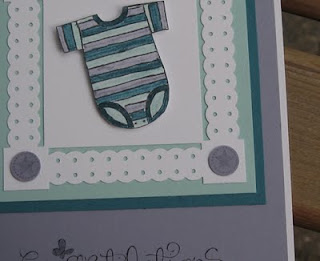 My Bits got another workout so they could adorn the corners of the frame. I like it. Ilikeitalot. Yes, I do. I just got my In Colors on Thursday so I am going to have to see how well they play with my other colors!