I love this week's color combination at the Color Lab! Bravo Burgundy, Pink Pirouette, and Sahara Sand. I have had a baby card in my head ever since it was posted, and had to get it onto paper. I used my new punches (YAY!) to build the design. Gotta use the new toys as soon as they hit the doorstep, you know! 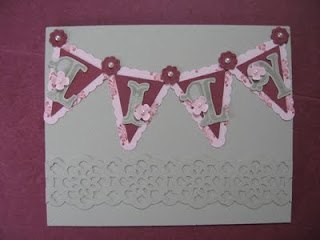 I decided to quilt the Sahara Sand background with my scoring blade. Whoops, my tool slipped. Hate it when that happens, but it was too late in the game so I used it anyway! Punched the Lace Ribbon Border in Sahara Sand and ran it thru my Xyron to get as much adhesive as possible onto the intricate cut. Too much adhesive in the design's open spaces. Could I emboss or glitter the sticky leftovers? Maybe another day. I left it in the wrapper and tried again, using 2 way glue instead. Of course I didn't think to use my vanilla Smooch spritz until after the whole thing was permanently glued together... I masked it by sticking my scratch paper under both the top and bottom edges, then sprayed on the shimmer. I think the little extra touch helps the border stand out from the same-color background. 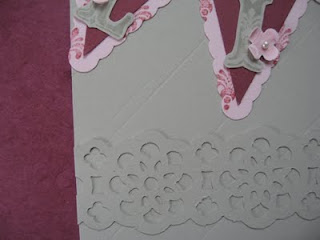 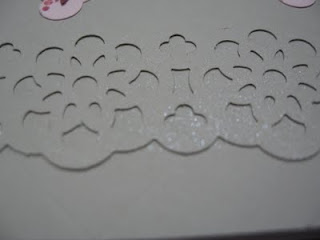 The Petite Pennants Punch (say that three times fast) banner turned out exactly the way I wanted it! I used the burgundy ink to accent the pink scalloped pennants with a little Broadsheet Accents stamp. The letters are stamped in Sahara Sand on the same color card stock with the Broadsheet Alphabet and fussy cut. The flowers are the Itty Bitty Bits, punched with the Punch Pack and blinged with pearls. The card was done! I sent a pic to my daughter to get her opinion. The baby's name is spelled LILLY! Argh! I'll give it another go later. I put a lot of energy into this, so if you know a girlie-girl named Lily who could use this as wall decor I'd be happy to convert it... 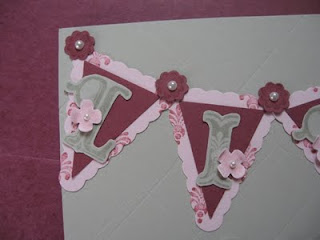 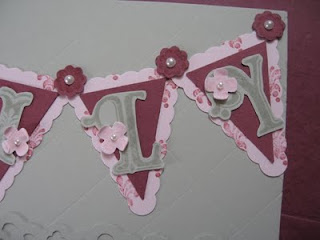 Yes, it's technically wrong. But I love it anyway! I like it as it is but I can also see it with some crochet ribbon bits, sponging, marker spritz spatters...